Our Lady of Angels

The beginnings of what we now know as Our Lady of the Angels, Rouse Hill began on 2 May 2007 when Fr Warren Edwards received a letter from Most Reverend Kevin Manning, Bishop of Parramatta Diocese, to establish Catholic services in the parochial district of Rouse Hill.

Appointed Priest-in-Charge, Fr Warren set about the task of starting a parish from scratch. It was a wonderful challenge to form this new part of the Body of Christ, as it is not often we get the opportunity to build up a community and church from scratch in a new suburb. We hoped to form a vibrant, close knit worshipping community and build a Church faithful to the tradition as well as being relevant to the present and future. It was also a great opportunity to build a parish and school together in a communion which is, social, spiritual and formative.

From the beginning there was an energetic and enthusiastic worshipping community who met for masses at St. Gregory’s Armenian School hall. We started with one Mass on Sunday morning with about 150 people. This foundation group developed a parish formation council and moved things along quickly. We chose a name based on its simple beauty and the Franciscan background of the parish; “Our Lady of the Angels”. Due to demand, the services expanded to three masses each Sunday while still at the school hall.

A need for a place of our own drove us to build a temporary church on the site of our future development. In February 2009 this church and car park were completed and worship has commenced in the new church. We now have three masses every weekend with about 800 attendees, mostly young families typifying the demographic of the area. The great involvement of the parishioners in ministries and social events speaks well of a positive future for the fledgling parish.

The Primary School officially opened in 2010 with 62 children across Kindergarten and Stage 1, 3 teachers, support staff, assistant principal and Principal. The staff, led by founding principal Eva La Rocca, did a great job in establishing this very modern and fully equipped school.

To meet the needs of this fast-growing area, in 2018 a second educational precinct was opened. Santa Sophia Catholic College will be a K-12 facility when completed. 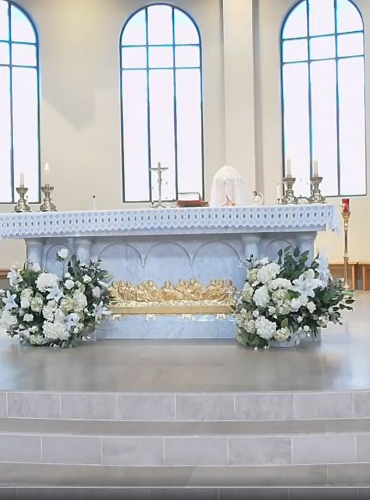